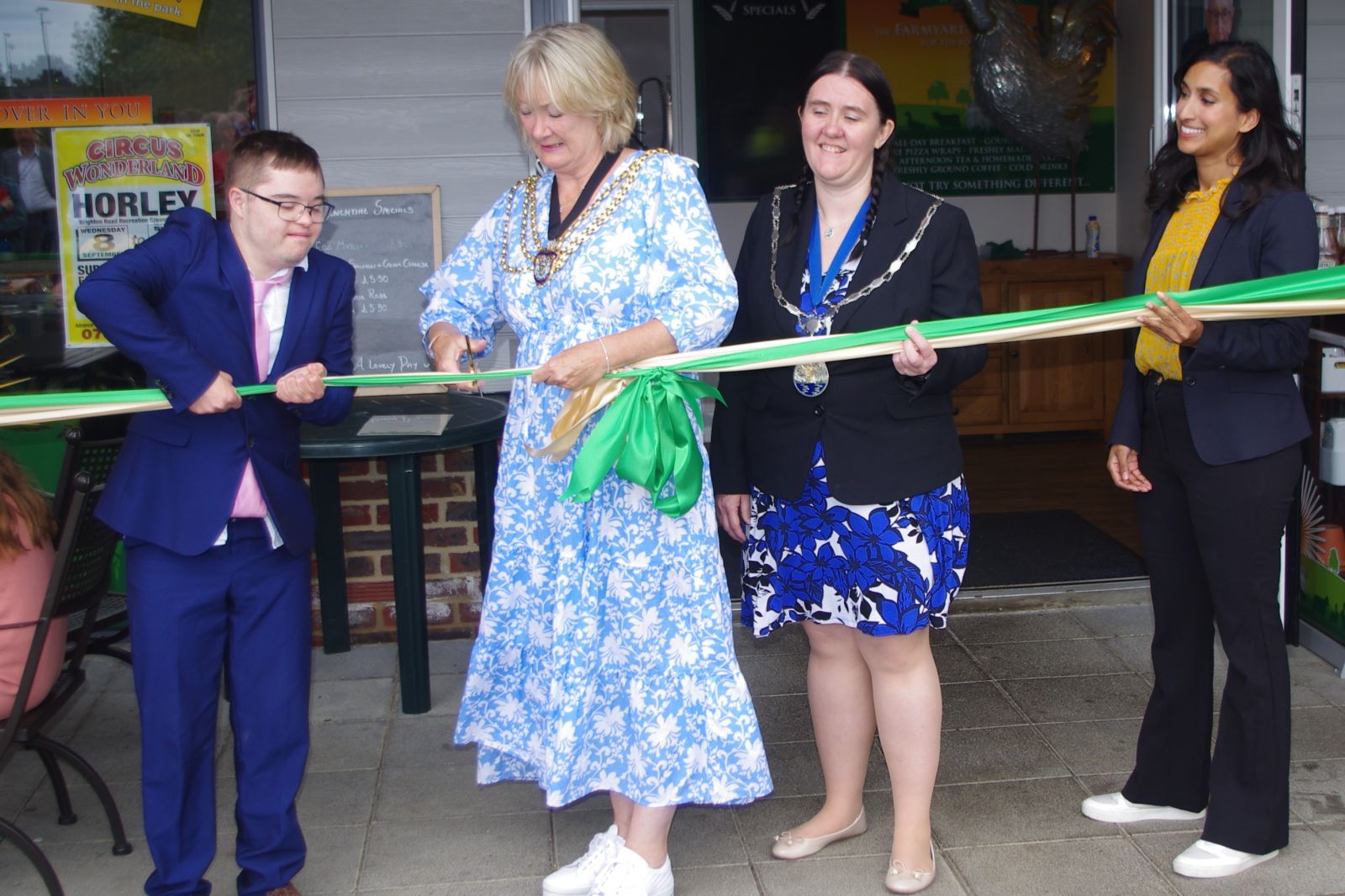 On Saturday, 11 September 2021, Horley Town Council held the grand opening of the new Café Pavilion at Horley Recreation Ground alongside the opening of the refurbished Tennis Courts.

Town Councillors were delighted to be joined by the Mayor of Reigate & Banstead, Cllr Jill Bray and MP for East Surrey, Claire Coutinho.  The opening ceremony was officiated by Town Mayor, Cllr Samantha Marshall who delivered an eloquent and meaningful speech, advising the Town Council had reached completion of the largest capital investment project it had ever undertaken to benefit the Horley community.  She thanked everyone present for being part of such a special and momentous occasion to mark the opening of the new community facility, including the building contractors, Newlyns who were in attendance to showcase their work and were highly complimented on their expert workmanship to create such a contemporary and stylish development.

A sincere note of appreciation was extended by Cllr Samantha Marshall to the well-known leaseholders ‘The Farmyard Kitchen’ who had all worked tirelessly since the Café opened its doors in summer months.  This was clear to see with so much complimentary feedback received from customers and park users along with widespread support for the popular new venue on social media.  She said the operators had enthusiastically supported the Town Council with the grand opening event arrangements which provided a free buffet with some champagne kindly donated by the Deputy Town Mayor, Cllr David Powell.  There were also  food marquees on site to offer delicious home-made cuisine; a superb jazz band to add to the relaxed ambience; and they had even thoughtfully provided two bouncy castles to keep the younger children entertained during the festivities.  She also acknowledged the return of Circus Wonderland to the park as always being a much welcomed and popular event to be enjoyed by people of all ages.

Cllr Marshall further welcomed Members of the Horley Lawn Tennis Club and commented that “the Town Council is delighted that the Club is able to offer ‘Free Tennis in the Park’ family coaching sessions, now taking place at the Recreation Ground on a Saturday afternoon during term time”. The refurbished Tennis Courts were later visited by the dignitaries present with photographs taken alongside the tennis players and Pickleball Club members whilst remarking that they were so pleased to hear that plans were also in hand to offer free coaching sessions in this fast growing sport to anyone who may be interested.

Cllr Bray opened her address by asking for a massive round of applause for Horley Town Council on their “phenomenal achievement which had been in the melting pot since 2013 and had overcome lots of hiccups along the way with secured funding to produce such a fabulous facility which will undoubtedly be very well used”.  She added that “the new Tennis Courts may well produce another tennis champion like rising star, Emma Raducanu, in years to come…” and she thanked everyone for coming to the event.

Claire Coutinho MP gave a heart-warming speech and commented to her audience “I am completed bowled over by the development and achievement of Horley Town Council.  Even in the short time since the Café has been open, I have heard so many wonderful things and I’m so impressed by all the people involved who got us to this point and I am really glad to be here today”.

Later followed Town Award presentations to two worthy community volunteers who received a small silver replica of the Town Mayor’s badge, a framed Certificate and a Citation read by Cllr Marshall for their voluntary work in the community.  It is fair to say the recipients ‘stole the show’ with such cheerfulness and high-spiritedness on receiving their awards. The wonderful achievement of the Horley Society of Artists Club was further recognised, having created the beautiful ‘Horley Little Library’ structure which will take pride of place inside the Café with books made available for all interested readers.

The proceedings culminated with the ribbon-cutting ceremony to announce the ‘Café In The Park’ as officially open and a photo-shoot followed to commemorate such a happy and momentous event.

The Town Council would like to sincerely thank everyone who supported the ‘Café In The Park’ project right from the outset and attended the grand opening, not least the photographers and many other helpers who gave their time voluntarily to be part of such a special event and to share in this wonderful achievement to benefit the Horley community for future generations.  We sincerely wish the Café Operators, ‘The Farmyard Kitchen’, continued success in their business venture and we fully endorse their positive message that everyone is welcome at ‘The Farmyard Kitchen …in the park’.

To see more photos of the day click here