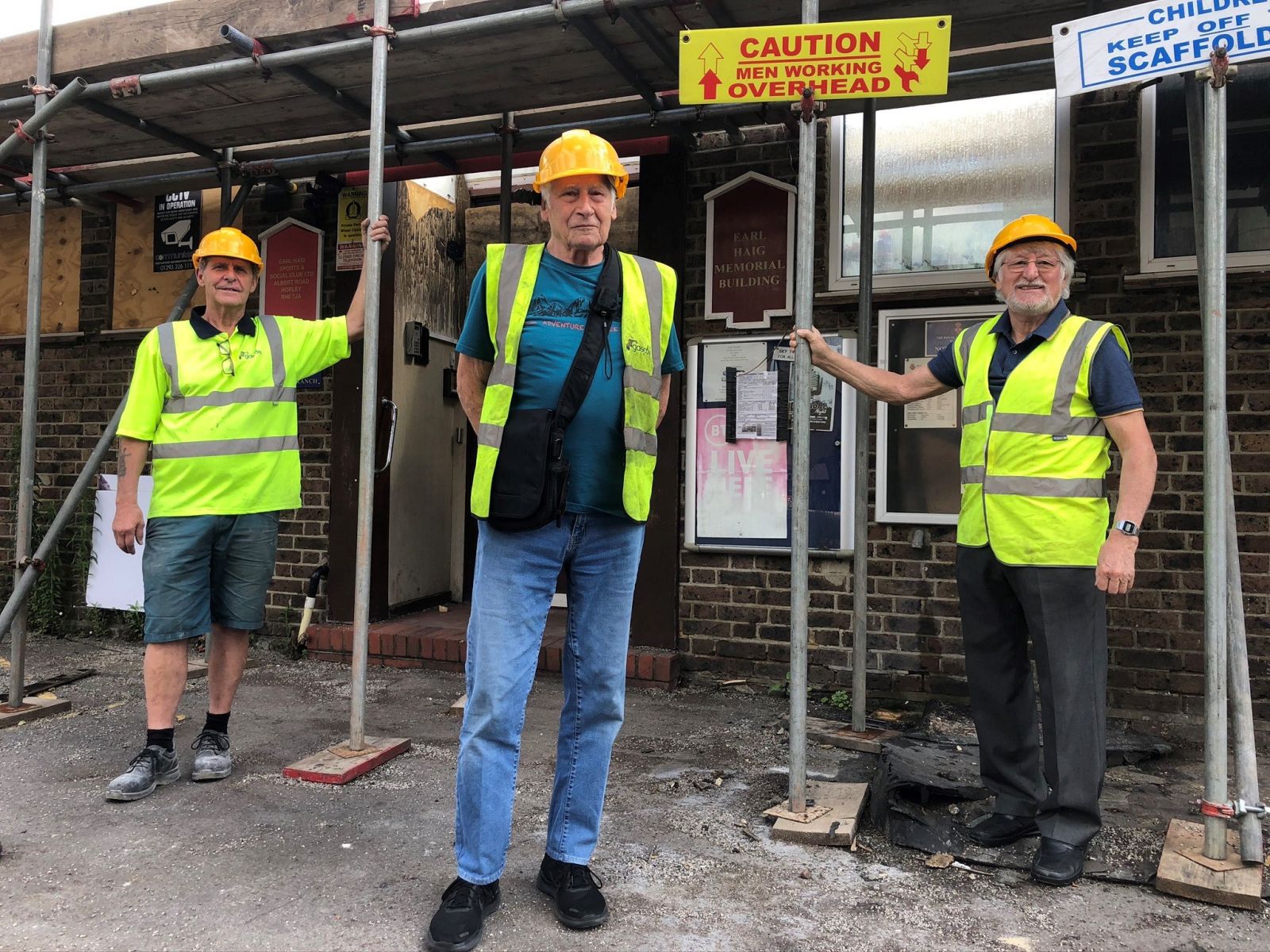 VIETNAM veteran and Horley Town Mayor David Powell is in training to walk the equivalent distance from his hometown to the Menin Gate in his latest fundraising stunt.

The daredevil mayor, and now recently appointed president of Horley’s Royal British Legion, is no stranger to extreme and adventurous projects with a long list of daring feats to his name including a record-breaking 30,000ft skydive.

Inspired by the efforts of 100-year-old Captain Tom Moore’s £32 million pound walk for the NHS, Mr Powell, 84, will complete the epic 165-mile walk by trekking laps of the Horley recreation ground and Memorial Gardens, to raise cash to help restore the town’s Royal British Legion headquarters in Albert Road after it was engulfed in flames in May, leaving members without a place to meet and locals without its popular venue.

Around £70,000 worth of damage was caused to the Earl Haig Sports and Social Club, following an electrical fault on May 15. It was damaged further still just days later by arsonists, adding more costs to the repairs.

Now Mr Powell is determined to get the social club back up and running and is prepared to put on his walking boots to do it.

Mr Powell explained: “I am determined to raise the money we need. It’s vital that we have the Earl Haig back up and running as quickly as we can but we need the people of Horley to help us.”

He added: “It will be hard for me to walk that far. I’m hoping I will have some help from other veterans and supporters so if I need to rest I can.

“It will take us weeks to complete but I am determined to do it.”

Mr Powell has a proven track record of extreme fundraising ideas, in 2014 he broke the world record as the oldest person to do a skydive from 30,000ft to raise money for the Royal British Legion, as well as countless other skydives and abseils for charity.

He explained: “When I heard it had caught fire I was devastated. People were crying and couldn’t believe what they were seeing.

“So many people, including young families, get so much joy from the club, I can’t put into words what it would mean to be able to get the club restored.”

He added the club was deemed “uninsurable” because the wiring was done in 1916 when the building was completed.

For most of the war he commanded the western front in France and died in 1928.

Mr Devlin paid tribute to his own army of volunteers, including local businesses and tradesman, who helped him clear the debris and start repair work.

He said: “D&R Carpentry have been fantastic. They fitted the whole roof including tiling, labour free.

“Plumwell have helped enormously too by supplying toilets and sinks free of charge.”

He added: “The list is endless of the volunteers, electricians, carpenters, plumbers, tilers, plasterers, decorators, bricklayers and general labourers working 12 hours a day, seven days a week. I could not wish for a better team.”

Tony Keay, secretary at the Royal British Legion, said: “The Earl Haig is our headquarters and without it we have nowhere we can hold our meetings.

“It’s a lifeline to many of our members and a social gathering for us all.”

He added: “We also run our Poppy Appeal from the club which is one of the main ways we raise money, last year we raised £23,000 for the appeal. If we don’t have a place to host the appeal, we may not be able to raise so much, which will be devastating.”

As a symbol to those who died in battle, Mr Powell will carry a wreath with him for the duration of the trek and ask the Mayor of Ypres, in Belgium, to lay it at the Menin Gate in memory of the fundraising veterans.

Cllr Powell was deployed to Vietnam in 1967 in an undercover operation heading up a security team to guard the British Embassy in Saigon against Viet Cong attacks.

Donations can be made online through their GoFundMe page.

*Every evening at the stroke of 8pm buglers play the Last Post under the Menin Gate as part of a powerful ceremony to remember the thousands of fallen soldiers from the Great War.

Historically, the Menin Gate of Ypres was simply a crossing point over the moat and through the ramparts of the old town fortifications, on the road to the nearby town of Menin. It had a special significance for the troops though: it was from this spot that thousands of soldiers set off for the part of the Front called the Ypres Salient – many destined never to return.